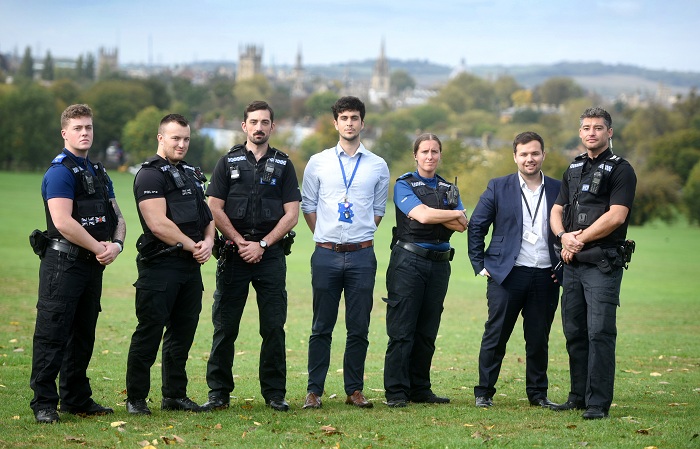 The taskforce is a direct response to rising concerns from Oxford residents about the amount of drug dealing and drug use taking place in public spaces. The number of discarded needles found in public places has also been increasing.

The taskforce will target the majority of its time and resources at three hotspots of drugs activity in Oxford at a time. These locations will be determined using data including needle finds, NHS ambulance data, and reports to the police via 101 from members of the public.

The current locations are Grandpont, Meadow Lane, and in and around South Park. If the drugs-related issues move elsewhere, the taskforce will move with them.

Community engagement is also key a component to the work of the taskforce in deterring drug activity in the area. This is being achieved by encouraging residents to remain vigilant, share information and report drug activity.

Oxford Community Safety Partnership has provided the taskforce with £40,000 to fund interventions, which could include clearing foliage to improve sightlines across parks and open spaces, improving street lighting, improving security measures or installing CCTV cameras.

All the work follows the principles of Clear, Hold and Build – clear the area of the drugs-related activity through arrests and disruption techniques; hold the area through high-visibility patrols, improving security and improved intelligence; and build back up the community use of the area through events, diversionary activities and neighbourhood watch schemes.

Oxfordshire County Council, as the owner of the transport and lighting infrastructure in Oxford, is significantly involved in these interventions. The County Council’s fire service, when on duty and not responding to an emergency, has also been deployed to hotspots to deter drug activity.

Uniquely within the Thames Valley, every single Oxford resident who reports drugs activity in their community to Thames Valley Police or Oxford City Council will receive a call back from the taskforce within a few days and then again after six weeks to follow up on the original report, check on the progress in the area, and inform the resident of actions that have been taken to tackle the issues reported.

Between mid-August and mid-October, the Oxford Public Spaces Drugs Taskforce has called back 101 residents who had reported drugs-related issues, analysed 606 pieces of intelligence from members of the public, made 13 arrests, seized 12 weapons, searched 23 people, carried out five high-visibility operations with Oxford Direct Services and the City Council’s Community Response Team to clear foliage and improve line of sight in hotspot areas, and completed 73 Automatic Number Plate Recognition enquiries on suspicious vehicles.

The taskforce will build on the joint work carried out over recent months as part of Thames Valley Police’s on-going Stronghold campaign, aimed at fighting organised crime in partnership, which has seen the Force working with Oxford City Council to carry out a wide range of activities to disrupt drug dealers and users at hotspots.

Oxford’s drug recovery service, Turning Point, has about 678 people in treatment for opioid addiction in the city. Drug treatment is freely available to everybody who is affected by drug use and there are no waiting times. Over the last year, Turning Point has supported 97 opiate users in Oxford to successfully complete treatment and become drug free.

The Office for National Statistics found that there were 25 deaths related to drugs misuse in Oxford between 2015 and 2017. This equates to 5.8 deaths for every 100,000 residents – above the Oxfordshire rate of 2.5 and the average across England of 4.3.

Oxford residents can help the Oxford Public Spaces Drugs Taskforce by reporting drug dealing and drug taking in their communities by visiting: www.thamesvalley.police.uk/tua.

Councillor Tom Hayes, Oxford City Council Board Member for a Safer and Greener Environment, said: “Councillors belong to and make their homes in the communities they represent. We’re constantly in touch with our residents and they’re repeatedly raising concerns about the open dealing and taking of hard drugs in broad daylight, as well as the discarding of used needles in their streets. We do not want this in our city.

“This Council has been listening to residents’ concerns and, with our £70,000 investment in two police community support officers and leadership in forming this taskforce, we want the city’s communities to know that we will always put their safety first. With this six-person drugs taskforce, we intend to deliver a hammer-blow to the drugs trade, help bring offenders to justice, and ensure the public hear directly about our work to have confidence in it.

“We also seek to end the cruellest element of the drug market. Crossovers between modern-day slavery and the calculated exploitation of very vulnerable people are commonplace and show why we need this extra investment. This Council has a commitment to end drugs slavery in our city by working with others to ensure that every vulnerable person can be found, stops being exploited, and gets the support they need to rebuild their lives.”

Superintendent Joe Kidman, Local Police Area Commander for Oxford, said: “Drug-related harm effects communities across the country at many levels. This Taskforce is a coordinated and intelligence led approach to use our shared resources to tackle the impact on local hotspots.

“No community should have to tolerate persistent and unchallenged drug dealing and use. We are already seeing how effective our joint Taskforce can be in turning these places around. We want our public spaces to be somewhere that local people and visitors feel safe and confident and where drug dealers do not.”

Gary Coupar, Oxfordshire Fire and Rescue Service Group Manager, said: “Our firefighters are active throughout Oxford and have a key community safety role to play alongside Thames Valley Police, Oxford City Council and others. Oxfordshire Fire and Rescue is part of Oxfordshire County Council and we work closely with our streetlighting and highways teams to respond in areas where we know there are problems in a way that helps make Oxford as inhospitable as possible for drug dealing.

“We support the gathering of evidence so that police can arrest offenders and disrupt exploitation. Our social workers for both children and adults will always take action to protect children, families and vulnerable adults who are at risk from criminals.

“We also work closely with colleagues at district councils – including Oxford City Council – who have responsibility for housing and many public places. Together we are confronting this national problem when it manifests itself in Oxford and the wider county of Oxfordshire. We will continue to do so at all times. Nobody should have to put up with persistent and unchallenged drug dealing and taking in their community.”

“Turning Point fully supports the launch of the Drugs Taskforce and we welcome the opportunity to work in partnership with the police, Oxford City Council and the community to ensure we reach out to drug users who desperately need treatment.

“Turning Point believes treatment protects vulnerable users, provides lasting solutions out of drug addiction and benefits local communities in Oxford. We have seen many additional users entering treatment as a direct result of previous joint operations in Oxford and we will continue to work in partnership to bring treatment to those who most need it.”

Mathew, a current service user at Turning Point, said: “I’ve been using heroin for over six years and I have noticed it has been harder to score drugs in Oxford recently, and so for the first time I have decided to sort myself out. I have spent more time doing positive things like going to Turning Point, who have been great in supporting me, and I have not used heroin for the past four weeks. Things are looking up for me at long last.”