Oxford City Council and Oxfordshire County Council are seeking to introduce a new Low Emission Zone (LEZ) for buses to be a minimum of Euro 6 standard.

As the transport authority, Oxfordshire County Council – with support from Oxford City Council – will be making an application to the traffic commissioner for a Traffic Regulation Condition (TRC) which will establish new Low Emission Zone requiring scheduled buses to be a minimum of Euro 6 standard.

Transport is by far the most significant source of emissions of NOx in the city, accounting for 75% of emissions, 56% of which are estimated to come from buses in the city centre.

Although it was previously thought that emissions were responsible for around 40,000 deaths in the UK, new figures (European Heart Journal, March 2019) suggest it is closer to 64,000, just 18 per cent less than the 78,000 deaths caused by tobacco.

2018 data from the city’s 74 air pollution monitoring locations found there were Nitrogen Dioxide (NO2) levels above the legal limit in four locations across Oxford.

In 2014, Oxford City Council and Oxfordshire County Council launched a Euro 5 Low Emission Zone for buses in Oxford city centre. The Zone was one of the first of its kind outside London and it won the Local Authority Air Quality Initiative of the Year at the National Air Quality Awards.

Data from the City Council’s 74 air pollution monitoring locations has shown that between 2016 and 2017, levels of toxic nitrogen dioxide fell by an average of 22.7% – the largest ever year-to-year drop. This drop has been attributed to the introduction of Euro 6 buses into main bus routes in central Oxford.

The new proposals would see an extension of the current Low Emission Zone created in 2014 to both cover a larger area and require buses to run a higher Euro standard engine – focusing on the city centre and the main routes leading into it which see a high volume of buses. 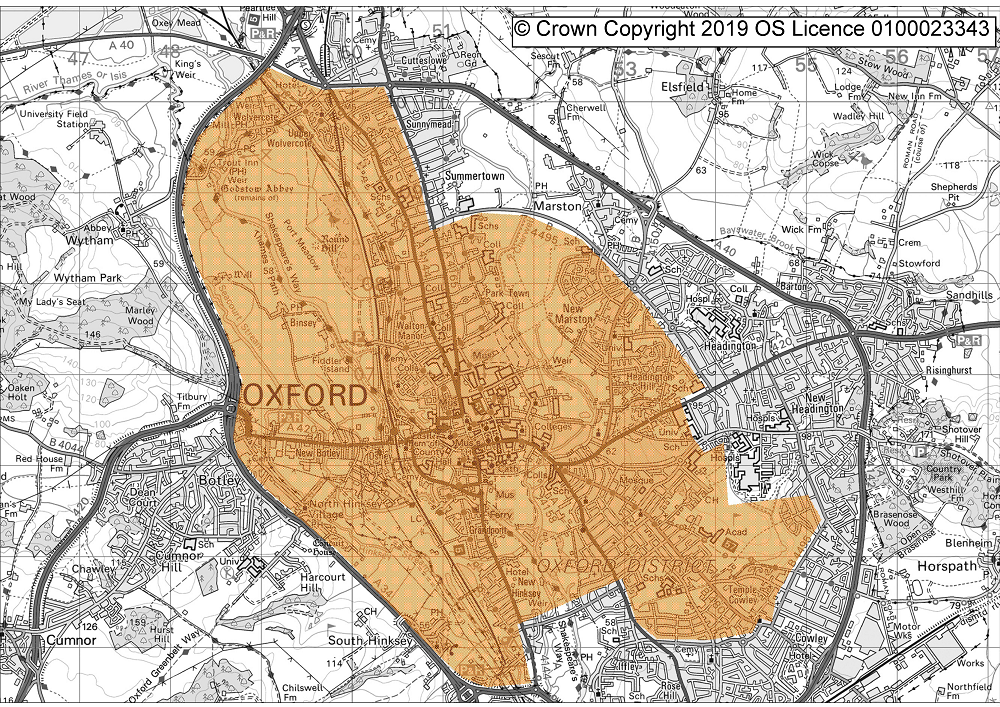 Under the new zone, local buses in Oxford would be required to meet a minimum Euro 6 standard for NOx from 2020, upgrading from the current Euro 5 standard requirements.

The two councils are proposing to introduce the new Low Emission Zone for buses in Oxford City Centre in two stages:

The councils have set out an aspiration of a zero emission bus network by 2035 and are working in partnership with operators to implement this.

Across Oxfordshire as a whole, 78% of all bus vehicle journeys per hour are made on routes which enter Oxford city centre, and will therefore have to comply with the updated proposals.

Within the Low Emission Zone, it is expected that 89% of bus miles driven within the zone will be Euro 6 by December 2020.

The ZEZ aims to tackle Oxford’s air pollution and protect the health of everyone who lives in, works in and visits the city. It is also expected that the ZEZ will improve air pollution levels across Oxfordshire because the buses and taxis that serve Oxford also serve towns and villages across the county.

Councillor Tom Hayes, Oxford City Council’s Cabinet Member for Zero Carbon Oxford, said: “This new Low Emission Zone will be a life-saver. Vehicles are polluting our air and making people sick. This Council has to slash pollution levels in order to prevent ill health and stop early death, and the bus operators have a role to play. Not only will the new Zone cover a large part of the city, but some of our most air-polluted roads, especially St Clement’s, will see cleaner buses traveling along them. I’m particularly pleased that local operators are working with the Council on this Zone and, thanks to funding secured by the Council, retrofitting 115 buses to the right standard and will be introducing five electric buses in 2019.”

Councillor Yvonne Constance, Oxfordshire County Council’s Cabinet Member for Environment, said: “The expansion of the scheme to lower emissions in Oxford brings real benefits to the whole county, as buses travel beyond the city and upgrade their fleets to comply with the new criteria. We have an ambition for a transport plan that transforms travel through innovation and choice and cuts congestion and pollution to protect people’s health and the environment across Oxfordshire. As the transport authority, the county council is very well placed to work with partners, so we can find the best solutions for embracing cleaner transport alternatives, such as less polluting cars and buses and cycling and walking."

Chris Coleman, Managing Director, Stagecoach, said: “We support the intention behind low emissions zones and are very clear that buses and coaches are a key part of the solution to the air quality crisis. We continue to invest heavily in cleaner, greener vehicles and will soon introduce a fleet of 21 new buses on ​the S1 and S2 services between Carterton, Witney and Oxford.

"While the majority of our buses will meet the LEZ requirements in 2020 & 2022, some investment will be needed to meet the requirements in full. Unfortunately additional costs can make it more difficult to keep fares low but we will do our best to minimise any impact on our customers. We firmly believe that emissions should be considered on a per-passenger basis, and the private car is by far the biggest generator of emissions. Therefore it is essential that additional measures are put in place to help cut car congestion and improve local air quality".

Phil Southall, Oxford Bus Company, said: “We welcome the proposals and the pragmatic approach taken in developing them. Oxford Bus Company has been proud to play its part in reducing harmful emissions in our City for many years and strives to be at the forefront of environmental improvements as technology evolves. Attention now needs to be focused on other, more polluting modes to play their part too.

“Partnership working will continue to be important in our journey to zero and we look forward to working with the City and County Council on a strategy to support the implementation of zero emission buses and we expect the revision to the Local Transport Plan (LTP5) due this year will be the framework for this.”