Nominations now open for the annual Certificate of Honour Awards

Do you know someone whose voluntary work has transformed the lives of others? 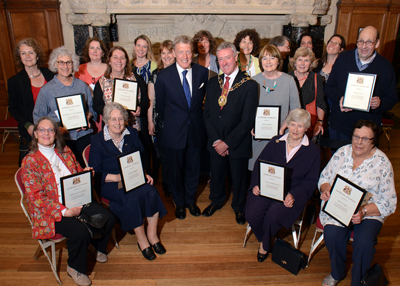 The Lord Mayor of Oxford, Councillor Colin Cook, is inviting nominations for the annual Certificate of Honour Awards which celebrates the invaluable work of Oxford’s voluntary community.

Oxford City Council is appealing for your help to find the people in our city whose compassion and dedication make a vast difference to the lives of so many. We hope that members of the public will take the time to nominate someone they know who deserves praise and recognition for their voluntary work.

Nominees do not have to live in Oxford, but the service and support they provide must be carried out within the city over a substantial period of time. Full terms and conditions can be found of the City Council’s website and are detailed on the nomination forms.

All nominations will be considered by a panel of independent judges; the Lord Mayor of Oxford, Lord Lieutenant of Oxfordshire and the Chief Executive of Oxfordshire Community and Voluntary Action (OCVA).

You can complete your nomination online using the form below:

The closing date for nominations is 4pm on Wednesday 10 April 2019.

The Certificate of Honour Awards Ceremony was established in 1998 and awards have been given annually since then.

This year’s winners will be invited to an awards ceremony hosted by the Lord Mayor of Oxford at Oxford Town Hall in May.