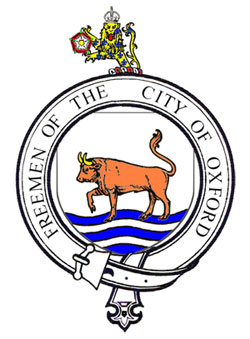 The term ‘Freeman’ was originally a definition of status in feudal society but in England it later became to mean a man possessing the full privileges and immunities of a city, borough or trade gild to which admission was usually by birth, apprenticeship, gift or purchase.

Before the Municipal Reform Act of 1835, being a Freeman of Oxford was very significant as only a Freeman could enter into business as a master or journeyman within the boundaries of the City (unless he was a privileged tradesman matriculated by the University). Only Freemen had the vote in council elections.

Today, the Freemen are Oxford’s most ancient body. They formed their Gild Merchant in Saxon times and later in the Domesday Book they are recorded as holding the town meadow, Port Meadow, in common. Even to this day, the Freemen are the beneficial owners of the meadow and may depasture on it any cattle and horses they own. They also have the right to fish in the River Thames which runs along the entire length of the meadow.

Admission to the Freemen of the City of Oxford

Essential qualifications for admission to the Freedom of the City of Oxford are:

To apply to become a Freeman of the City of Oxford please download, complete and return the application form via the link below.

Completed application forms should be made to the Lord Mayor’s Executive Assistant via civicoffice@oxford.gov.uk or via post at Civic Office, Town Hall, St Aldate's, Oxford, OX1 1BX.

Applicants must submit originals of each document required to prove eligibility either in person at the office above or via recorded post.

The Council and Freemen of Oxford aim to host two admissions per year; one in March and another in November; however there are no set dates. Therefore, the applicant may have to wait some time before admission is possible. If there are limited dates when the new Freeman and his or her family can attend, the Council always endeavours to assist if it can.

Admission Ceremonies are hosted in Oxford Town Hall and include the oath-taking ceremony followed by a light buffet. Applicants are welcome to invite up to five guests to accompany them. Additional guests may be accommodated on the prior approval of the Civic Office.