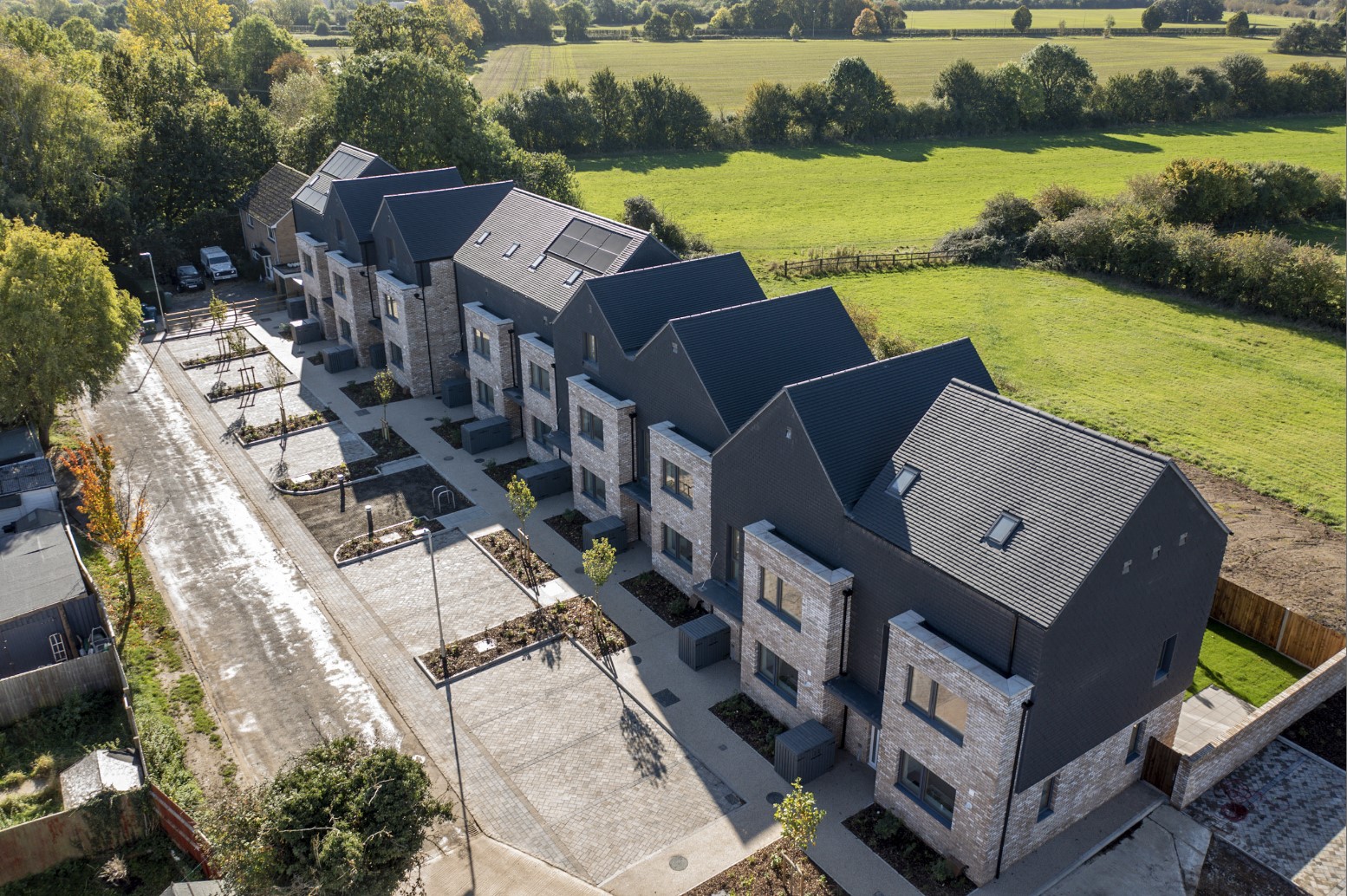 Oxford City Council is letting nine new homes for social rent after the completion of a development in Cumberlege Close, Marston.

The row of new family homes includes two two-bed, four three-bed and three four-bed houses. Oxford City Housing Ltd (OCHL) handed over the new homes on 21 October and the council is in the process of allocating them to families on the waiting list.

Built on a previously developed site once used for sheltered housing, the new homes are in three stepped blocks. Gable ends, pitched roofs and construction in buff brick and grey tiling provide a modern take on nearby homes while remaining sympathetic to the overall character of the area.

The new houses will be let at social rent, which is calculated with reference to the size and value of a home and average regional incomes.

According to the Office for National Statistics, in 2020/21 median monthly private rents in Oxford were £1,250 for two-bed and £1,450 for three-bed homes. The median monthly rent for homes with four or more bedrooms was £2,200.

Enhanced building fabric and air tightness standards, together with the use of solar panels on four of the houses, mean that the new homes go 19% beyond carbon reduction requirements in current building regulations.

To encourage biodiversity the development includes bat and bird boxes, as well as bee bricks in outside walls of the houses. Bee bricks provide nesting spaces for solitary bees to lay their eggs, while blue tits have already moved into one of the bird boxes.

The new homes were designed by Levitt Bernstein Architects and built by Feltham Construction on behalf of OCHL. The development has also been supported with £495,000 in funding from the Oxfordshire Housing and Growth Deal.

“Oxford needs homes and in particular it needs affordable homes. But affordable doesn’t have to mean ugly, and Cumberlege Close embodies OCHL’s commitment to building homes that are high quality, design-led and sustainable as well as genuinely affordable. OCHL has now handed over the nine new homes to the council, which is in the process of letting them to families on the waiting list. I look forward to seeing them moving in over the coming weeks.”

“When we talk about building the right homes for Oxford we mean homes that are comfortable, sustainable and that add value to the local community – a design for life. I think we’ve achieved this with Cumberlege Close and we’re proud to see the council now letting these nine new homes.”

Cumberlege Close is part of OCHL’s programme to build around 2,000 new homes for rent and sale over the coming decade. Together with 354 council homes being built at Barton Park, this will see more than 1,100 new council homes providing the genuinely affordable housing that Oxford needs.

This programme will represent the first significant development of council housing in Oxford since the 1970s.

Another 300 homes are expected to be shared ownership and other affordable tenures. Shared ownership gives people the opportunity to get a foot on the property ladder by buying a stake in their homes that they would not otherwise be able to afford.

The remaining homes will be for market sale and the money raised by selling them will subsidise the building of council and other affordable housing.

Whether for rent or sale, all OCHL homes represent an investment in the sustainable future of Oxford by going beyond current government carbon reduction targets – helping the city on its journey to zero carbon for new developments by 2030.

OCHL is also in the process of establishing a procurement framework for modular housing that will play a vital role in ensuring new housing meets the 2030 zero carbon target. This framework will also provide the resources and expertise to unlock difficult sites that traditional developers would be unable to do while meeting the council’s requirements for affordable homes.

High demand and scarce availability mean that Oxford is among the least affordable places for housing in the UK. People on average outcomes are priced out of the housing market and private rents are nearly double the average for England as a whole.

Meanwhile, there are currently more than 2,850 households on the council’s housing waiting list.

The cost of housing pushes people into hardship, overcrowded conditions or out of Oxford altogether. Half of Oxford’s workers have to commute into a city they can’t afford to live in – leading to growing unaffordability, increased congestion and carbon emissions across Oxfordshire, as well as difficulties for employers in recruiting and retaining staff.

The cost of housing means that a third of Oxford’s children live below the poverty line and is a key factor behind poor educational outcomes.