100 years of council housing in Oxford

As November draws to a close, so too does the 100th anniversary of council housing in Oxford.

The first two completed council houses in the city were opened on 23 November 1920 by mayoress Florence Lewis, wife of then mayor Edmund Lewis. The two houses still stand on the corner of Iffley Road and Addison Crescent.

Addison Crescent is named after housing minister Dr Christopher Addison, architect of the Housing, Town Planning, &c Act 1919. The Act was passed to finance the building of new homes after the First World War and marked the beginning of council housing nationally.

A total of 215 ‘Addison Act’ council homes were built under the 1919 Act by what was then the county borough of Oxford. These first estates were built on the Cowley Road and Iffley Road, then on the outskirts of the city. They featured homes with steeply gabled roofs and Arts and Crafts detailing.

The building of council homes accelerated through the 1920s, with 1,647 new homes built between 1923 and 1930. Over the following decade hundreds more were built, including the estate that featured the infamous two-metre high Cutteslowe Walls – built in 1934 by a private developer to separate their houses from the adjoining council estate.

Although the council unilaterally bulldozed the walls in June 1938 the High Court ordered their reinstatement and they were not finally demolished until March 1959.

At the end of the Second World War, as now, Oxford needed homes and in 1945 the housing waiting list stood at 5,000. A shortage of available land – exacerbated by the adoption of the UK’s first green belt outside London in 1956 – meant that most post-war council housing was concentrated on new estates south and south east of the city.

Planning permission for 2,800 council homes in Blackbird Leys was granted in 1953, with the first residents moving into their new homes in 1958. Blackbird Leys included Oxford’s first two tower blocks in Evenlode and Windrush towers, and construction continued in phases until the 1970s.

In 1981, 29% of Oxford’s population lived in social rented housing but by the time of the 2011 census this had fallen to 21% – the result of Right to Buy and government refusal to let councils invest sale proceeds in new homes. Oxford now has around 7,800 council homes.

Oxford needs homes as it is regularly cited as the least affordable place for housing in the country.

According to the Office for National Statistics (ONS), in 2019 the median house price was £395,000 – 12.55 times median gross earnings (£31,472) in the city. For England as a whole, the median house price is 7.83 times median earnings. The cost of housing in Oxford puts home ownership out of the reach of people in occupations like teaching, nursing, transport and retail.

Half (49.3%) of homes in Oxford are now in the private rented sector, where the ONS reports a median private rent of £1,500 a month for a three-bedroom home. The equivalent amount for England as a whole is £795. Meanwhile, there are currently 2,355 households on the council’s housing waiting list.

The first significant council housing development since the 1970s is now underway at Barton Park, which saw its first tenants moving in during February 2019.

When completed Barton Park will have 885 tenure-blind new homes and 354 of these (40%) will be homes let at social rent by the council’s housing company, Oxford City Housing Ltd (OCHL). The first phase of Barton Park – known as Mosaics – is now nearly complete and 95 of the 237 homes will be let by OCHL.

Over the next 10 years OCHL aims to build 1,891 new homes on top of the 354 homes being built at Barton Park. Of these, 1,125 will be council homes providing the genuinely affordable housing that Oxford needs.

The council set up OCHL in response to Oxford’s need for homes. The main aims of the housing company are to increase the supply of new housing and council homes, and to provide a financial return to the council to help protect frontline services.

“It’s been 100 years since the first council houses were built in Oxford, and it’s a salutary reminder that Oxford needs council homes now as much as it did in 1920. Over the next 10 years OCHL will deliver 2,245 new homes. Of these, 1,125 will be council homes and a further 301 will be in other affordable tenures like shared ownership – helping meet the needs of our city’s families for secure, stable and affordable homes.” 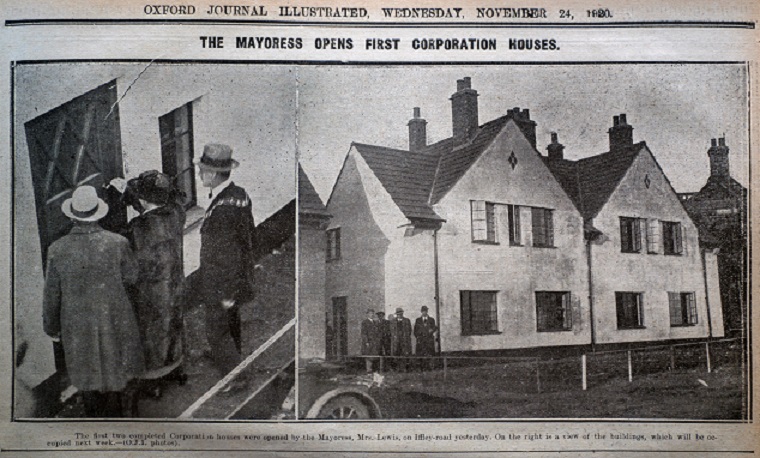