Oxford City Council and Oxfordshire County Council have shared updates on the temporary bus gates proposals for Oxford city centre, which aim to assist Oxford’s recovery from the coronavirus pandemic.

The bus gates aim to create an environment which is safer for pedestrians and cyclists. This is to be achieved through ensuring quicker, more frequent buses on less congested roads. It will thus allow potentially reallocating road space to create an improved pedestrian and cycling environment.

Under normal conditions, vehicles use the city centre as a cut through. The aim is to reduce the use of city centre as a through-route, thereby cutting traffic levels and congestion within and on the approaches to the centre, to reboot the local economy and support local businesses.

The two councils have now launched a public survey to help inform the proposals, including a list of frequently asked questions addressing comments that have already been submitted to the councils.

The survey will inform the decisions about the scheme including the location of the bus gates, timings, and how road space can best be reallocated ahead of the proposed installation of the temporary bus gates at the end of September.

Earlier this month the councils announced their intention to install the temporary bus gates as part of a wider response to assist in Oxford’s economic recovery from the coronavirus pandemic.

A bus gate is a form of access restriction that allows only buses, cyclists, emergency vehicles and other limited exempt users to pass through a particular point at specified times of day.

The new temporary bus gates would be implemented using experimental traffic regulation orders following guidance recently issued to local authorities by the Department for Transport to assist in the delivery of emergency active travel measures and other pandemic recovery schemes.

It is proposed that the two temporary bus gates for the city centre are to be located: 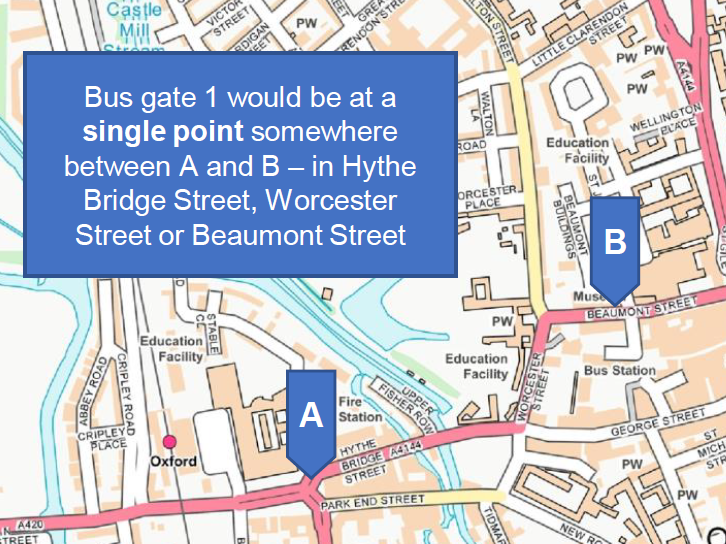 (Map of proposed temporary bus gate 1 somewhere between A and B in Hythe Bridge Street or Worcester Street, between Frideswide Square and Beaumont Street) 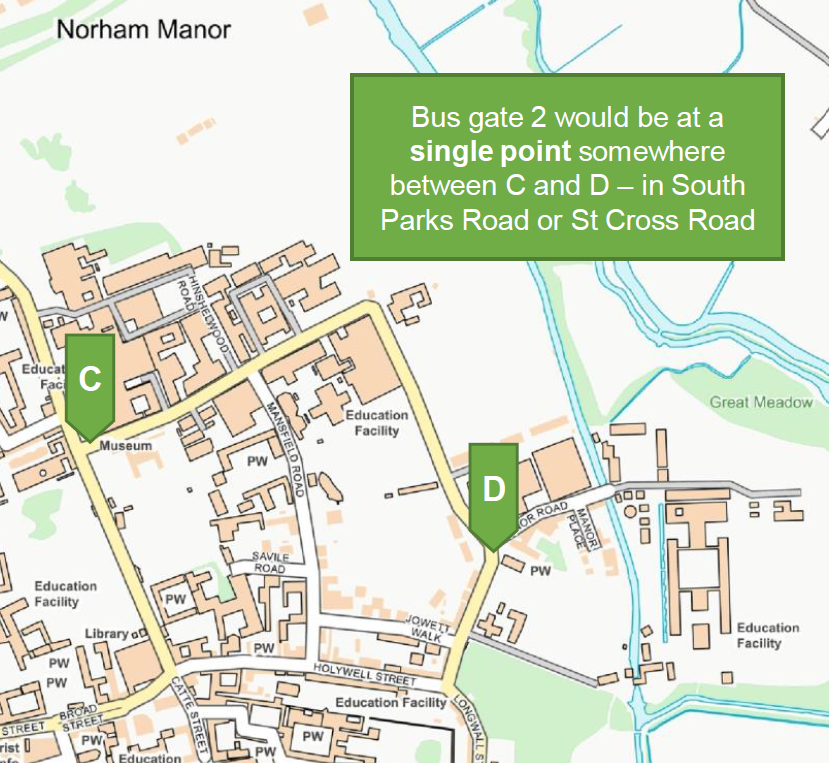 The key points of the proposals are:

The bus gates would potentially operate seven days a week between 7.30 am and 6.30 pm, aligning to the existing restrictions at the current High Street bus gate.

The bus gates are specifically designed not to prevent access to any areas of the city, including the city centre. Access will be maintained through the bus gates for certain modes of travel and vehicles; other traffic will still be able to get to their destination via alternative routes.

The scheme will be funded by both councils and implemented by Oxfordshire County Council as the transport authority.

More information on the proposals can be found here, including a list of Frequently Asked Questions (FAQs).

Supporting recovery from the coronavirus pandemic

The bus gates are part of measures that are being introduced by both councils to support recovery from the coronavirus pandemic, consistent with the Government’s national plan to create an environment which is safer for pedestrians and cyclists.

During lockdown Oxford city centre saw a 64% reduction in air pollution levels and increased cycling and walking. However, to sustain this level of activity, reduce traffic dangers, and maximise space for cyclists and pedestrians, significant change to road space is required.

Oxford’s city centre economy is highly reliant on people arriving by bus - a survey undertaken in Oxford city centre in 2017 confirmed that for shopping, 70% came by Park & Ride or bus on the days surveyed.

The bus gates proposals reflect a change in the Government’s guidance on safe travel on 17 July which says: “You can help control coronavirus and travel safely by walking and cycling, if you can. Where this is not possible, use public transport or drive.”  The recent change reflects the Government’s intention to promote a return to public transport as part of the recovery from the pandemic and Oxford’s temporary bus gates aim to rebuild confidence in bus travel.

Oxford has also limited city centre car parking. Before the pandemic, car parking was already at capacity, particularly at weekends. Under the proposals, visitors wishing the access the city centre using a car, will still be do this, with all the car parks still being accessible from all points.

The councils are encouraging feedback through an online survey. The survey will inform decisions about the scheme, which the councils are aiming to introduce by late September at the earliest.

A time period has not been set for the duration of the bus gates, however Experimental Traffic Regulation Orders have a maximum time limit of 18 months and the bus gates cannot be made permanent without full public consultation.

The survey can be accessed on the Oxfordshire County Council website, and is open until August 9 2020 at 23.59.

“We all know what it felt like to drive through the city centre before the pandemic—drivers were losing time, bogged down in stop-go traffic. We need to stop Oxford’s roads from getting so congested that it’s quicker for people inside the ring road to abandon the city centre and spend their money elsewhere.

“The city centre needs to be a destination, not a drive-through. It’s people that spend money in local businesses and support local jobs, not cut-through cars.

“Oxford is a medieval city and our councils have limited room to manoeuvre: we can either remove some buildings to make room for more cars or we reduce the number of cars going through the city centre. These temporary bus gates don’t aim to block you from driving into town, they seek to funnel motorists into a set of routes which leave the others free for public transport, cycling and walking.”

“The temporary bus gates will form an important part of the recovery of the transport network in Oxford and offer many benefits to residents and visitors. Bus journeys across the city have been slowed by increases in motor traffic over many years along with increasing air pollution.

“Bus gates give us a chance to build back a more sustainable city as we recover; they will help the recovery of the bus operators, reduce congestion where they are located and help offer safer roads for cyclists. Residents have indicated that they want safer streets with less traffic as part of the recovery and this will be one of the steps forward to achieving this goal.”