Oxford Homeless Movement: Can a city ‘solve’ homelessness? How Oxford is taking an innovative citywide approach to curb the number of people rough sleeping

To mark the launch, which will be celebrated at Open House on Little Clarendon Street on World Homeless Day, partner organisations are announcing a raft of new, collaborative measures to ensure that nobody should have to sleep rough on the streets of Oxford. They are also asking residents – including those experiencing homelessness – as well as businesses and organisations of Oxford to come and get involved.

Street homelessness has been on the increase since the turn of the decade and hit record levels in England in 2017, including in Oxford.

“We’re doing more than ever before to prevent and reduce rough sleeping, including more beds and better assessment services to help people off the streets as quickly as possible. But the number of people experiencing homelessness is still too high. We have to undertake street counts every two months and what we’re finding is that a quarter of people are new to the streets. We can’t end homelessness on our own. We need Oxford to join us in the Movement and help beat homelessness together.”

“It’s time we all said ‘Enough is enough’. It will take a whole city effort if we are to have a serious go at preventing anybody from having to sleep rough on our streets. Oxford Homeless Movement is an exciting step in the right direction.  Getting this far has required huge progress in co-operation and trust and to truly launch the Movement we need you – individuals and Oxford based businesses and organisations – to come on board and get involved. Join the Movement today by signing the charter, raising your awareness and understanding of homelessness and commit to volunteering or to making a donation. We all have a role to play.”

Some of the measures delivered so far include:

“We’re doing this properly, tackling the most difficult questions and trialling new approaches, led by people who have experienced this themselves.”

Building on the efforts of Oxford Homeless Movement, many local organisations and individuals are also making efforts to lend their support to preventing rough sleeping in Oxford:

Organisers of Oxford Homeless Movement are calling on more organisations and individuals in Oxford to get involved.

“We know how much people in Oxford care. Lots of people want to help. We’ve made it easier. Come and get involved by signing the charter or exploring the website to see the ways in which you can help. Never before has a city approached this on so many levels with such a broad base for support.  Everyone is involved and we think that this is the way to make an impact”. 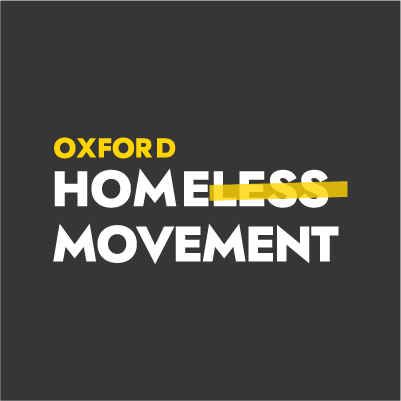