The Museum of Oxford's collection hosts an exciting range of archaeological and social history objects ranging from Roman pottery to marmalade jars. 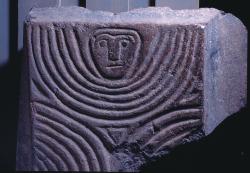 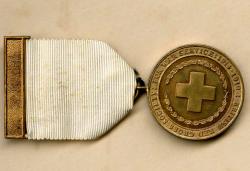 This medal was given to Alice Hargreaves (nee Lidell) for her charitable work during World War One. Many believe that Alice Lidell was the inspiration for Charles Dodgson's, under the name Lewis Caroll, character Alice in the famous books about Alice's adventures in Wonderland. 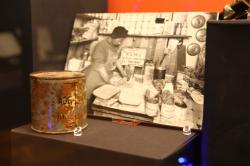 This weathered tin once contained marmalade produced by Frank Coopers and was found in Antartica in the expedition stores for Scott's mission to the South Pole. Coopers marmalade was made in Oxford to a recipe which belonged to Frank Cooper'swife Sarah. 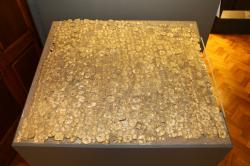 This is an example of a knuckle bone pavement. It is an example of early recycling in Oxford. The surface of this pavement is also non-slip, self-draining and very cheap to make. Oxford has had a market since over 1000 years ago, trading in all kinds of food and goods. It was on an important trade route north to south in the early Middle Ages. 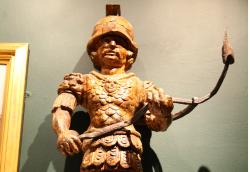 The Museum houses the original bell striking Quarter-Boys from Carfax Tower on the corner of Cornmarket Street and Queen Street.

As a pair, they would mark every quarter of an hour by striking the tower bells. Replicas of these now stand on Carfax tower and have been brightly painted as the ones in the Museum would have once been.

This eerie mask was produced at the death of Oliver Cromwell on the 3rd of September 1658. This is actually one of the many copies made which can be seen in several museums throughout the UK. Oxford featured prominently during the Civil war but was used by King Charles as his stronghold. Cromwell signed King Charles'death warrant in 1649.

Object on loan from Dr Glennie

Siege of Oxford by Jan Wyck 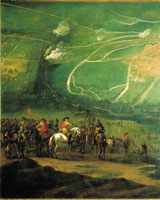 This large painting depicts Oxford based on maps of Oxford's defences during the Civil War.

The Medieval walls of the city are shown in red and the painting remains one of the major sources of information on the siege of Oxford despite the lack of detail and action.

To find out more about the collections held by Oxfordshire County Council's Museum Service, visit the Oxfordshire Heritage Search. Once there, you can find more information on many of the objects held at the Museum of Oxford and objects held at various museums around the county, as well as the Museum Resource Centre in Standlake.

Most of the items held by the Oxfordshire Museum Service come directly from the people of Oxfordshire, who donate them to us. If you have something, with a good story about someone in Oxford or made by a firm based in Oxford, you might have just what we are looking for. However, please remember don't bring in items without an appointment, as we cannot accept them over the desk. Either contact us via email on [email protected] or alternatively contact the Museums Resource Centre on 01865 300972 or email [email protected]