(All figures quoted refer to Council Tax Band D and are rounded to the nearest pound. Percentages here and on the actual Council Tax bill are expressed to one decimal place). 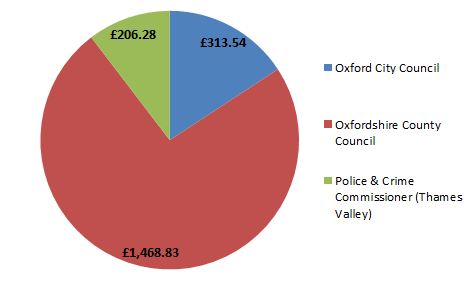 Therefore, If you live in an average band D home in Oxford, £307.80 of your total Council Tax bill for this year helps pay for Oxford City Council Services.

The cost of Oxford City Council's services is equivalent to under one-sixth of your total Council Tax bill.

Increases that are being asked for this year

Oxfordshire County Council has increased their 2018-19 Council Tax by 2.99% to £1,468.83. It should be noted that there will be no Adult Social Care precept in 2019-20 as the County Council has already raised the maximum 6% that in December 2016 the Department for Communities and Local Government announced could be raised over the next three-year period, namely 2017-18 through to 2019-20.

The Parishes ask for funding to pay for services they provide in the form of a precept on the City Council. Residents in the parishes pay this as part of their Council Tax.

Oxford City Council therefore also raises Council Tax to pay for Parish Councils and the Basic Amount of Council Tax inclusive of Parish precepts is £313.54 for 2019-20.

In the Unparished Area, the City Council undertakes the parish functions.

The costs relating to this are as follows:

In accordance with the Localism Act 2011 the Council is required to calculate its Council Tax Requirement. This figure is the amount that the Council will raise in council tax from the residents in the city to fund services for the coming year 2019-20.

The reasons for this are:

ii. The results of the ongoing review work carried out by Revenues staff on dwellings that are either exempt or which have a Council Tax discount.

The Secretary of State for Housing, Communities and Local Government has made an offer to adult social care authorities. (“Adult social care authorities” are local authorities which have functions under Part 1 of the Care Act 2014, namely county councils in England, district councils for an area in England for which there is no county council, London borough councils, the Common Council of the City of London and the Council of the Isles of Scilly.)