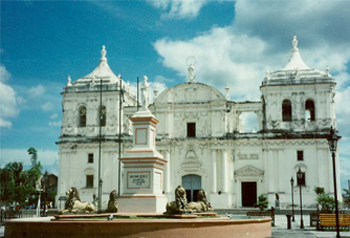 León is Nicaragua's former capital and second largest city. Long-established as the intellectual and political centre of Nicaragua, it boasts the oldest university in Central America - the Autonomous University of Nicaragua (UNAN), founded in 1813 - and a stunning baroque cathedral, Cathedral Basilica of the Assumption of León. Cárcel la 21 (Prison 21), which once housed political prisoners, is today an art gallery

Nicaragua is one of the poorest countries in Latin America. It is in a volcanic region and subject to volcanic eruptions, hurricanes and tidal waves, which have a devastating effect on the poorer sections of the population.

León has been twinned with Oxford since 1986. Since the beginning of the twinning Oxford has raised money for health and education projects, as well as responding to the natural disasters, which have afflicted León. Several delegations from Oxford have visited León, including school and university students. Also, doctors from León have spent time in Oxford learning English.

The Oxford León Association organises fund-raising events including salsa evenings and an annual sponsored swim, which raises money for water-based development projects such as storage tanks in rural communities or filters to remove arsenic from drinking water supplies.

Each year there is an Oxford-based performance of La Misa Campesina, the Nicaraguan "Peasant Mass", consisting of vibrant folk-songs, written during the revolution in Nicaragua and still celebrated throughout the country.