Oxford has a compact city centre with an outstanding collection of world famous buildings. Its origins lie in the late Saxon period and its original street pattern still survives along with some of its earliest monuments. It contains one of the best preserved groups of medieval and later university buildings in the world and a wealth of architectural gems from the classical to the modern.

Below you will find some of Oxford's greatest buildings. Many of them owe their existence to the growth of the University of Oxford over 800 years, but not all. You will also find fine examples of the city's churches, houses and civic buildings - just a few of Oxford's special listed buildings of national and international importance.

Designed to guide the visitor through the city's most attractive and historic streets, the map towards the bottom of the page is an introduction to Oxford's architecture and a celebration of the development of the city over a thousand years.

The majority of the buildings featured here can be visited. There may be a small charge to visit some of these buildings at certain times. The postcodes listed are those of the main institution to which the featured building belongs. A GPS system may not direct you to the building listed here.

For further information and leaflets about guided walks and tours of Oxford please visit the Oxford Tourist Information Centre, 15-16 Broad Street, Oxford, OX1 3AS or the Experience Oxfordshire website. 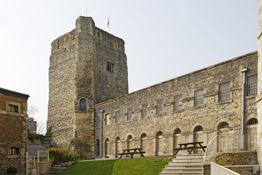 A rare example of early stone military architecture. Standing four-storeys high with thick local ragstone walls, it defended the west gate of the Saxon town and later became the tower of St George's Chapel, the crypt of which survives. (See also the tower of the church of St Michael-at-the Northgate (C11th) which guarded the north gate.) In 1071, Robert D'Oilly incorporated it into his Norman Castle a tower on an earth mound, the latter still visible today. 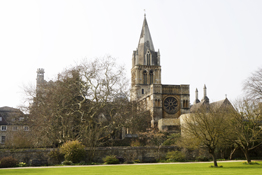 The site of the nunnery where Oxford first began it was refounded as the priory of St Frideswide in 1122 dedicated to Oxford's Patron saint, its mainly late Norman design survives. The first of Oxford's 'dreaming spires' and one of England's earliest was added c1325. The choir has a magnificent late C15th vault. It is the smallest cathedral in England and the chapel of Oxford's largest College, Christ Church where Christopher Wren's Tom Tower is a key motif in the city's skyline. 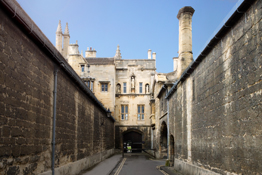 Founded in 1379 by William of Wykeham, Bishop of Winchester, New College is one of the most significant Medieval buildings of its kind in Europe and an excellent example of English Perpendicular Gothic style. It was one of the first colleges to lay out its key buildings of Chapel, Hall, Library and sleeping rooms around a quadrangle which became the model for all later colleges. The College and gardens are enclosed by the well preserved C13th town walls. 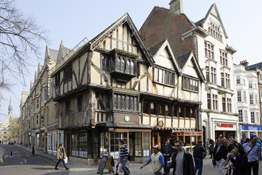 Built for a local wine merchant who called it the New Inn. This handsomely decorated building is a rare surviving example of a three-storey timber-framed dwelling with shops below (contemporary with New College above). It is a typical example of the houses of wealthier citizens in Oxford and northern Europe in general in this period. 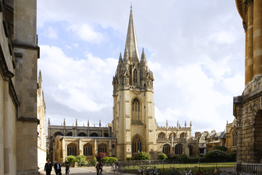 The church and tower are key features of one of Europe's most beautiful streets. The C14th Gothic spire is magnificently decorated. A very fine baroque porch was added in 1637. It is both the parish and university church with long links to the University. The Old Congregation House, (now café) is the University's oldest building its first administrative centre (1320) with its library above. The tower provides classic views across the heart of the historic University city. 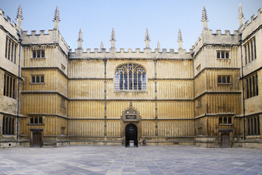 Duke Humphrey's Library was created above a lecture room intended for Theology in order to house the books from St Mary the Virgin (see above). The vaults in the Divinity School are one of the great achievements of European Medieval architecture. The lierne vaults create a star-shaped pattern of an extraordinary delicacy and richness as they connect to 455 carved stone plaques to those who created it and gave money. 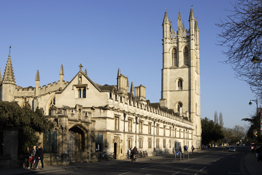 Founded in 1458 by William Waynflete, this College has one of the finest groups of late C15th buildings in the country set within extensive grounds behind high battlemented walls. The beautifully proportioned bell tower is one of Oxford's iconic images welcoming visitors to the city from the east and the focus for the city's traditional May Day celebrations. 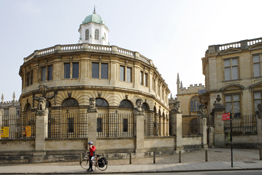 Modelled on a U-shaped open air theatre in ancient Rome, this is Oxford's first Classical building and the first large building by Christopher Wren. The eight-sided cupola, (small dome on top), with its large windows offers fine views across the city. Within, are fine painted ceilings which screen the supporting structure of the 70-foot roof span. Next door, The Museum of Science, originally the Ashmolean Museum (1679-1683), was Britain's first public museum with a fine porch facing the theatre. 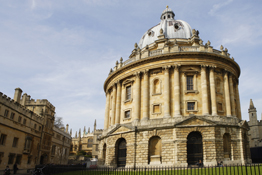 Built at a cost of £40,000 donated by the charitable trust of John Radcliffe, a wealthy physician to William III. It was the first round library in the country. The rotunda was originally the idea of the architect Nicholas Hawksmoor but the work was interpreted by James Gibbs. It has one of the finest Classical interiors in England with the plasterwork in the upper room particularly excellent. 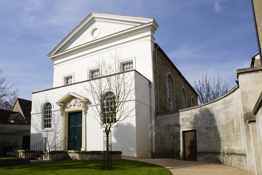 This building designed by Thomas Complin and resembling a non-conformist chapel has a place in architectural history as the oldest purpose-built public music room in Europe and England's first concert hall. Many famous composers including Handel and Haydn have performed here. Holywell Street, one of the city's most picturesque streets, remains much as it would have looked in the late C17th. 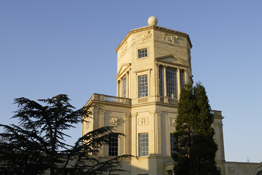 Built for the University with funds from the John Radcliffe trustees, the observatory is a major monument of Classical design inspired by the 1st century Tower of the Winds in Athens. Until 1936 telescopes surveyed the stars through the large windows. Of note are the frieze of the Winds carved in relief along the top and the panels of the Zodiac on the first floor. It is considered to be architecturally Europe's finest observatory. 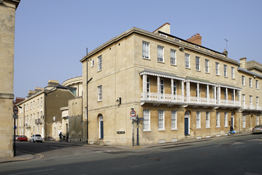 One of Oxford's most handsome residential streets and its first planned development for the professional middle-classes. The elegant Georgian terrace curves towards Worcester College and is faced in Bath stone with cast iron balconies similar to those of the same period in Cheltenham. (See also neighbouring St John's Street of a similar style and period and the Ashmolean Museum below.) 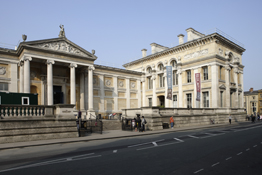 This is Oxford's finest neoclassical building. Designed by Charles Robert Cockerell in Bath and Portland stone, who drew on the wide classical tradition which originated in classical Greece. The building houses two important University institutions, the Ashmolean and the Taylor Institute with separate entrances. The Martyrs Memorial (1841-3) also in St Giles, designed by George Gilbert Scott in high Gothic Revival style is architecturally a complete contrast. 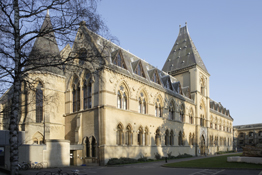 Designed by Benjamin Woodward in Gothic Revival style the work was much influenced by the Oxford-educated John Ruskin. In marked contrast to the Ashmolean, this is one of the first examples of a non-religious Gothic building which glorifies instead the natural world. Inside are columns made of different examples of native rocks. Everywhere the ornamentation incorporates natural forms, plants, birds and animals, under a magnificent glass roof. 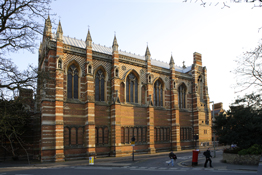 The first complete college to be built for 250 years. An impressive example of Gothic Revival by William Butterfield. It was named after a key figure in the Oxford Movement and intended for the education of poorer students. A striking use of brick creates a lively chequered decoration. Within is a vast chapel and quadrangle to match. On the fringes of the 19th century city it links the historic core to the North Oxford suburb beyond. 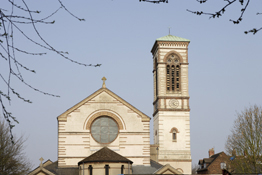 Designed by Arthur Blomfield with money from local philanthropist and printer Thomas Combe the outside is of a simple Italianate (Classical) style using local rubble stone coated with cement. The interior is a great example of the Oxford Movement High Church tradition. Towering above the nearby canal and terrace houses of the working class suburb of Jericho the tower of St. Barnabas is a key landmark across the city. 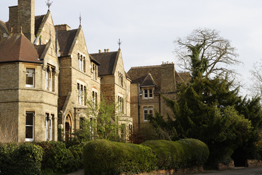 Oxford's first planned suburb designed by local architect William Wilkinson for St John's College. Characterised by large red and yellow brick villas with tall gables, set in spacious gardens with low boundary walls and railings along tree-lined avenues. The suburb extended across the previously open fields from St Giles to the roads south of Summertown. It is regarded as one of the finest and most complete Victorian suburbs in England. 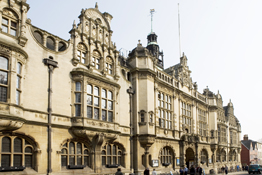 A wonderful example of late Victorian civic pride, this richly decorated and finely detailed Neo-Jacobean public building was designed by Henry T Hare. It provides the city with one of its most striking roof lines of highly embellished gables and cupola carved by master craftsman William Aumonier. Within, a magnificent staircase leads to a vaulted Hall and timber roofed Assembly room and library all finely decorated. 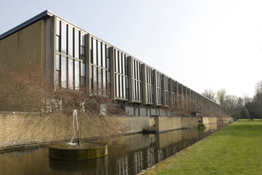 Considered a perfect piece of architecture by many and listed Grade 1 in 1993, it was the first new college to be built since Keble College (see above). Danish architect, Arne Jacobson took the plans of New College and created a modernist version of the classic layout, using a simple colour palate and range of materials to very fine effect. Everything down to the chairs and cutlery was designed by the architect. 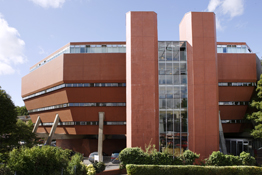 Designed by James Stirling and Partners as student accommodation for Queen's College its unusual sculptural shape and bold use of bright red brick has not been to all tastes. It was listed Grade II in 2009. The curved glass front of the building forms a private courtyard. It was intended to be viewed from a riverside walk that was never built.

21. Iconic buildings of the future? The Saïd Business School 2002 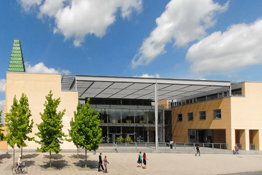 The late C20th has had few complete new buildings of note facing public streets but many very successful modern additions to old ones. However, the Saïd Business School, (2002) designed by Dixon Jones Architects, prominent with a Ziggurat tower (temple tower of the ancient Assyrians and Babylonians) is a welcome addition to Oxford's skyline. It contains an amphitheatre sometimes used for public performances. 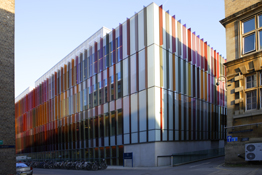 The New Biochemistry building, for the University of Oxford was designed by Hawkins\Brown. The building's colourful glass and steel exterior allow views of the cutting-edge research work being done within. An ambitious arts programme was incorporated into the design reflecting the scientific process of discovery, visible most notably on the glass windows. 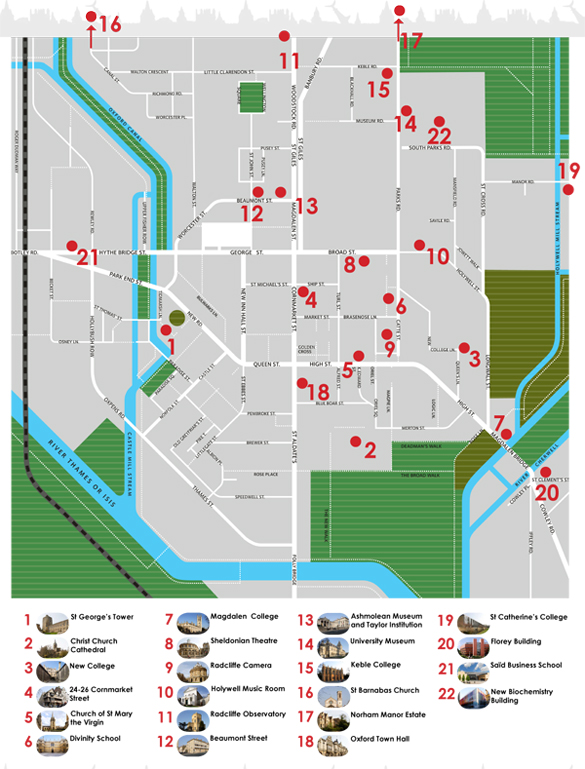