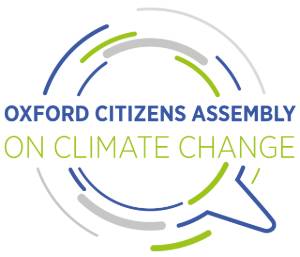 The Oxford Citizens Assembly on Climate Change took place on the weekends of Saturday 28 September and Sunday 29 September, and Saturday 19 and Sunday 20 October 2019.

The 2018 Intergovernmental Panel on Climate Change (IPCC) report warned that the current global target of 80% cut in carbon emissions by 2050 is not enough to avert catastrophic temperature change. It said it’s essential that global temperature change is limited to 1.5 degrees Celsius and that rapid, far-reaching and unprecedented changes in all aspects of society are required to ensure this.

Oxford was be the first UK city to hold a citizens assembly on climate change to help address the issue of climate change, and consider the measures that should be taken in Oxford.

What is a Citizens Assembly?

A citizens assembly is a group of people who are brought together to discuss an issue or issues, and reach a conclusion about what they think should happen. The people who take part are chosen so they reflect the wider population – in terms of demographics (e.g. age, gender, ethnicity, social class) and sometimes relevant attitudes (e.g. preferences for a small or large state).

Citizens assemblies give members of the public the time and opportunity to learn about and discuss a topic, before reaching conclusions. Assembly Members are asked to make trade-offs and arrive at workable recommendations.

What was the Oxford Citizens Assembly on Climate Change?

The Oxford Citizens Assembly on Climate Change involved a randomly-selected representative sample of 50 Oxford residents who learned about climate change and explored different options to cut carbon emissions through a combination of presentations from experts and facilitated workshops. Oxford was the first city in the UK to deliver a citizens assembly on the topic of climate change.

As the evidence around man-made climate change is clear and overwhelming, was treated as a ‘given’ and the Assembly was not be asked to consider whether or not it is a reality.

Ipsos MORI was been appointed to undertake the recruitment of participants and provide overall facilitation for the Oxford Citizens Assembly on Climate Change.

In January 2019, Oxford City Council members unanimously declared a climate emergency and agreed to create a citizens assembly in Oxford to help consider new carbon targets and additional measures to reduce emissions. In April, Members set a vision to reduce the City Council’s own emissions to net zero by 2030 at the latest.