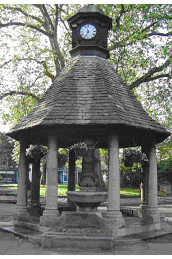 St Clement's and the Iffley Road lie immediately east of Magdalen Bridge and the River Cherwell and both streets form entrances to Oxford from the London direction.

St Clement's Street is, in origin, an extra mural suburb of Oxford stretched out along the main road to London. The old medieval Parish Church of St Clement stood where The Plain roundabout is today. The earliest surviving buildings, such as the Old Black Horse 2nd No.27, date from the years following the 17th century Civil War.

Iffley Road also owes its origin to a route to London, that via Henley. Its buildings are, however, late in date and the visual character of the area relies greatly on the presence of mature tree planting. Iffley Road mixes, in the main, two architectural styles in its houses, the stuccoed, based on classical modes, and the brick gothic normally associated with North Oxford.