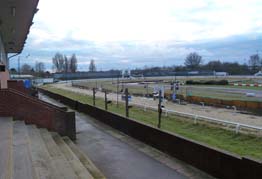 Oxford Stadium lies on the north side of Sandy Lane on the northern edge of the Blackbird Leys Estate. The site has been used by the community for greyhound racing and speedway since 1939, with evidence of an earlier unregulated flapping track in the same location.

The location and character of the stadium illustrates the socio-economic character of Oxford's eastern suburbs during the 20th century. The area is representative of inter-war sport and entertainment within the city as part of Oxfrod's early 20th century growth in response to development as a manufacturing centre.