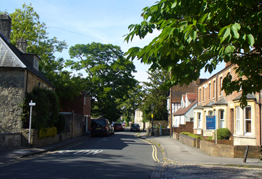 The village, now known as Old Headington to distinguish it from the modern suburb and shopping centre, lies within the ancient bounds of the royal forest of Shotover and Stoward and has its origins in a royal manor belonging to the Saxon Kings. The boundaries of the present village are clearly defined; on the south by Cuckoo Lane; on the west by the grounds of the former Manor House estate, now John Radcliffe Hospital; on the north open agricultural land (and of course the A40), and on the east by Bury Knowle Park.

Although the original royal manor house was already ruinous in medieval times and successive fires destroyed the ancient crofters cottages, many of the more substantial postmedieval stone houses and the medieval Church of St Andrew have survived.

An important part of the appraisal process is finding out how people value the area. The appraisal was prepared with the assistance of community groups, businesses and local residents and using the Oxford Character Assessment Toolkit. A consultation draft was presented for comment between 1 April and 11 May 2011, with an invitation for submission of written comments on the draft. After reviewing comments received a revised draft of the appraisal has been prepared to reflect the opinions expressed, where these were relevant and correct.