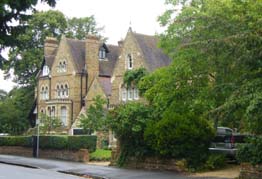 Much of the area on which North Oxford now stands, formerly Walton Field and St Giles' Field, was acquired by St John's College in the 16th century. It was developed between Walton Manor and Summertown as a residential suburb of large detached and semidetached houses beginning in the 1850s with the laying out of Park Town (1853-5).

Traditional iron railings were once an important and distinctive feature of the North Oxford Victorian Garden Suburb.

Many of the railings were removed during the war and of those surviving many are in need of repair or replacement. Increasingly many building owners wish to reinstate their boundary ironwork to enhance the appearance of their property, but are unsure where to start.

A guide has been prepared by Oxford Preservation Trust and Oxford City Council and is intended to assist residents in the reinstatement of their railings.