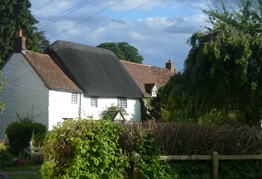 The name of Marston is derived from the original settlement on the marshy ground bordering the water meadows of the River Cherwell, initially, a hamlet of the manor of Headington. From the medieval period property was owned by a number of farming families, as well as the Oxford Colleges, who rented land out as farms.

As a result, the village has retained a distinctive character as a focus of vernacular farmhouses and cottages dating from the 17th, 18th and 19th centuries with more substantial houses representing settlement by Oxford tradesmen in the village in the 19th century. It retains an attractive green setting that preserves its distinctive character apart from nearby residential estates