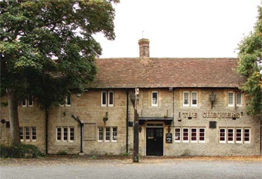 The district known today as Quarry, stands on Corallian limestone and has its origin in the extensive quarrying industry that provided much of Oxford's building stone in the medieval and later periods. The older buildings in the Quarry do not form a village in the conventional sense, but represent the colonisation of the "hills and holes" left by quarrymen. The survival of these quarries in a residential area is of considerable industrial archaeological interest.