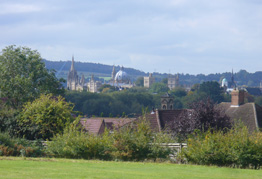 Headington Hill stands to the East of the Cherwell valley, and when viewed from the west, its hillside forms a green landscape background to the historic city centre in its valley setting. The hillside also provides a number of vantage points giving good views down to the city's skyline. The northern part of the hill, between Marston Road and Headley Way and above Cuckoo Lane, comprises a residential area, which was originally laid out in late Victorian times on a grand scale but subsequently much divided. The southern part of the hill contains the public parks of Headington Hill and South Park, together with Schools and Oxford Brookes University and residential area of the historic Headington Hill hamlet