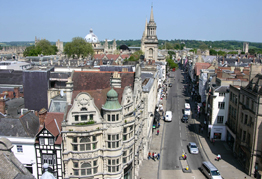 The historic centre of Oxford forms one of the masterpieces of European architectural heritage. It is also a major regional commercial centre. Many of its historic buildings still function for the purpose for which they were built, and provide accommodation for the University of Oxford and its colleges.

From small beginnings as a settlement in the Saxon period, Oxford grew by the 11th century into one of the largest towns in England and a major trade centre. The Norman conquest brought the construction of the Castle and the establishment of major religious houses.

The infant University arose in the 12th century and gradually grew into a major force in the city's life. The Saxons' rigid street layout and the fixed line of the 13th century defensive walls, together with the floodable river valleys, largely determined the plan of the historic centre as it is today. The gentle curve of the High Street, the great market place of St Giles and the older churches, together with the post-medieval timber-framed houses, belong to the town rather than the gown.

A change to the boundary was approved by the Council’s Cabinet on 29 May 2019, following public consultation.

• St Thomas’: one of the earliest suburbs outside the city walls; the relationship between the city and its waterways, motor industry, and workers’ housing can be found here. The extension includes 39-42a Hythe Bridge Street; and two blocks south of Park End Street and Frideswide Square, (fronting Park End Street, Frideswide Square, the northern half of Becket Street, Hollybush Row, and 1- 5 Osney Lane).

• The University Science Quarter: a physical demonstration of the university’s commitment to the promotion of scientific research within the city during the mid-19th century, and beyond. Each building in the area is of its time and designed to reflect its use, which is continuously changing as the field adapts. Changes in building styles and types is expected and encouraged in this area in order to maintain the university’s place as a world leader in scientific excellence.

A draft Management Plan and Design Advice has been published for public consultation in February 2022.