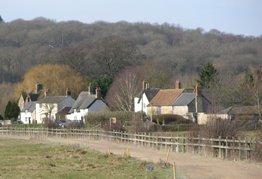 Binsey's name most likely derives from Byni's island, which was in the nearby Thames. It belonged to St Frideswide's Priory and subsequently Christ Church became the major landowner. It survives as a predominantly small, agricultural settlement within the Green Belt and flood plain to the north-west of Oxford.