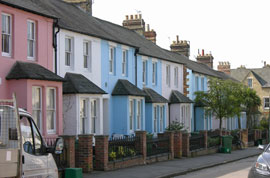 Jericho represents the Georgian and Victorian industrial and residential expansion of the City of Oxford into the surrounding countryside. It is an area of working class and artisan housing that has developed a unique character by virtue of its historical land ownership, relationship with the canal, the railway, three major employers and its unique position as a working class suburb in the midst of the middle and upper class estate that was developed by St John the Baptist College.

The area has a distinct architectural aesthetic and is interspersed with a number outstanding examples of 18th and 19th century architecture. The contribution of Thomas Combe, the University Press and Lucy Ironworks to the creation of the character of the locality should not be underestimated.

The re-development that took place, as part of the General Improvement Area status in the 1960's and 1970's, should be seen as part of the wider story in Oxford of the conflict between the preservation of historic communities and the drive for modernisation following World War II.

Following the Jericho study and subsequent consultation with the local community the City Council has also taken steps to introduce further controls in order to sustain the character of the area. On the 31 March 2011 an Article 4 Direction was served restricting the permitted development rights of dwellinghouses in the Jericho area. This means that, once the Article 4 Direction comes into effect planning permission will be required for the following changes to the exterior of dwellinghouses:

Please note parts of Walton Street and Worcester Terrace are included that are located within the City (Central and University) and Walton Manor conservation areas.